It's amazing the things you can discover when you interview Star Wars-related people.
This interview hits very close to home for me.
That's not a pun on Gerald Home's name. I'm talking about the fact that Gerald has frequented the Athenaeum Hall in my home town of Lilydale.
What are the odds, hey?
Gerald's also the original Mr Muscle too. :) 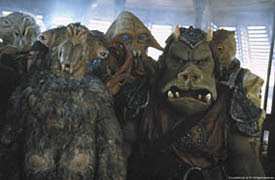 1. What was it like on Star Wars: Return Of The Jedi?

There are several facets to this question:

But having said all that, when you're working on something, you have to try to forget the history, or it could overwhelm you, and everyone must focus on the work at hand at any given moment.

So if you ask me what it was like physically working on ROTJ, the answer is
- it was very hard work! Jabba's Throne Room, for example, wasn't a particularly big set, yet at times there were well over 100 people on it:
actors, mime artists, extras, helpers, costume people, technical crew etc.
Imagine all those people in a relatively small space, then add cameras, hot lights and smoke guns, and you'll begin to picture how hot and sticky it was much of the time - and was even worse once we were inside our masks.

But all that was the nature of the job, to be expected, so there was no complaining by anyone. It was just incredibly exciting to be part of it all.
And we were very well taken care of: each of us had a dresser who removed our masks whenever possible. When it wasn't possible, they used hair dryers to give us fresh air - through any orifice they could find in the masks!

The slightly sad thing was that we were supposed to be heavily featured in scenes with Jabba the Hutt. In fact, we rehearsed before filming started, and worked out lots of "business" to be used in filming. But when all those other people came on set, we often got lost in the crowd, and much of what we had rehearsed wasn't used. It's interesting to think of how the Jabba scenes might have looked if we Jabba's Aliens had been featured more. 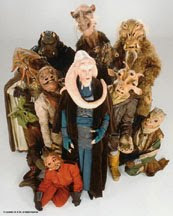 2. What can you tell us about your characters on Star Wars?

I can tell you that I'm one of the few actors in Star Wars history who played both Light Side and Dark side characters!

My main character was called Squid Head when we were filming. At the time
(1982) all I knew about him was that he was a Bad Guy, part of the court of the most vile gangster in the galaxy, Jabba the Hutt. That was the character description I was given, so I knew this character was very Dark Side.

Star Wars fans will know that in later years, Squid Head was given the name Tessek, and a whole back story was written about him (in Tales from Jabba's Palace). I only found out about all this a few years ago, and was delighted to learn that I didn't in fact die in the Sail Barge explosion in ROTJ! For over 20 years I had thought I'd been blown up along with Jabba, but no - I had escaped and returned to Jabba's Palace to pick up the money I had embezzled from him! I also learned that my/Tessek's brain is still alive, having been lasered out, and is now kept in a nutrient jar. So you never know, he/I might return one day.

My other character was very Light Side: the Mon Calamari Officer, trusty right-hand man to the nicest man in the galaxy, Admiral Ackbar.

When we were in the middle of shooting the Mon Calamari scenes, I was given
2 pages of additional scenes to learn, with dialogue. These were experimental, involving myself and Ackbar. They weren't used in the final film because the mouth of my Mon Calamari mask wasn't designed to be operated animatronically, and so didn't move convincingly.

I kept 2 call sheets from the Mon Cal filming, one white and one yellow.
Yellow means second unit, usually directed by a second unit director, but the scenes involved were blue screen Battle of Endor scenes, and George Lucas directed them himself because only he knew what (battle scenes) would eventually be in those blue screens.

On the call sheets, I'm called Officer/Controller/Aide, and in the additional scenes all the "Aid" lines were mine. 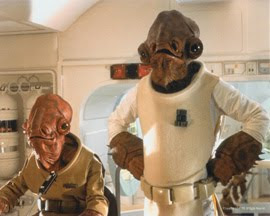 3. What preparation work did you do, as an actor, for these characters?

People sometimes ask me why I'm not in the credits for Return of the Jedi - but I am there, under Mime Artists, near the end of the credits, after Ewoks.

There were 9 of us employed as Mime Artists, though we all came from various backgrounds: some were actors, like me, who had studied mime, some were puppeteers or acrobats or street mimes and clowns. What we all had in common was that we were all performers who knew how to bring characters to life without the use of dialogue, which isn't easy inside masked costumes.
That's why we were called "Mime Artists", but in fact we were on the same contracts as the actors who worked on ROTJ.

As we were employed to play these very physical roles, the only real preparation we could do was to make sure our bodies were fit and in good shape physically.
There wasn't any real character preparation I could do, other than to remember that Squid Head was a Bad Guy and the Mon Calamari Officer a Good Guy - and as I was playing 2 characters, I worked out different physical shapes for each of them: Squid Head was always very upright and moved stealthily and gracefully, whereas my Mon Cal was more hunched up, reflecting the fact that he was often sitting over a console.

4. My brother and I loved the show, so I¹d like to ask, what can you tell us about your time on the set of Time Gentlemen, Please?

What an interesting question! I'm glad to hear you and your brother liked it. I didn't know it had been shown in Australia (or maybe you've seen it on DVD).

I absolutely loved working on this show: the writing (by Richard Herring) was brilliant and Al Murray was very nice indeed, and totally supportive and appreciative. It was a fun set to work on, with no stress or difficulties.
And watching Phil Daniels work up close was like seeing a lesson in acting for the camera: he was/is very, very good at what he does.

And of course the part of the Leprechaun was a gift for me because I was able to use so many skills at once: puppetry, acting and voice, along with an Irish accent. You'll know that I had a lot of swear words to say. Well, to be honest with you, I found that very liberating! It's not often that an actor gets to talk like that in public, and when you do, you've got to go for it and give it all you've got. So it was a kind of release. Definitely one of my favourite jobs ever - so thank you for asking about it.

While I'm on the subject of my work being seen in Australia, let me tell you about the face inside the Star Wars masks which was seen in TV commercials in Australia in the late 80s and 90s! I was the original Mr Muscle in the TV ads for Mr Muscle products. Who knew all those years ago that Mr Muscle was inside those Return of the Jedi characters?! To refresh you memories, here are links to some of those ads: 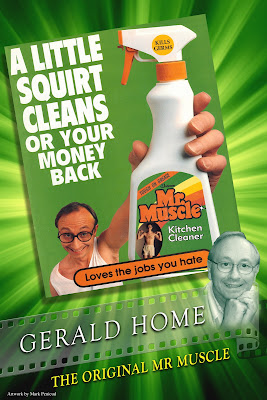 Finally, let's talk about the present, as I'm still very much a working
actor: 2 films to watch out for in the coming months, which I think you'll be interested in:

LONDON BOULEVARD, starring Keira Knightley, Colin Farrell, Ray Winstone and a host of others, directed by William Monahan who wrote The Departed. I have a tiny part in this, playing an undertaker, in a scene in a cemetery with Colin Farrell.

CHATROOM, directed by Hideo Nakata (The Ring/Ringu and Dark Water), starring Aaron Kich-Ass Johnson. It's a psychological thriller. I have a small part in this too, though I play an unpleasant character which Star Wars fans won't like! It was a joy to work with Hideo Nakata. I've seen a preview of the film and loved it, though critics at the recent Cannes Film Festival didn't like it much. I guess it's a film for younger people, not middle-aged critics!
I emphasise that my parts in both films are little more than cameos, but I'm not concerned about that: it's almost impossible for actors like me to get parts in Hollywood films shot here in London, so I was thrilled to be involved, even in a small way, with such talented people. 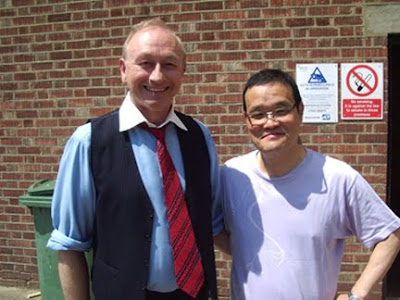 Finally, to Maarten and all the blog readers, what else can I say but...
May the Force be with you all!


Thanks Gerald. I couldn't have put it better myself.
What did you think of this interview? Please comment, or email me directly at mgbouw@yahoo.com.au
Posted by Straight To DVD at 3:19 AM