Planet Of The Apes

I remember seeing this movie at a charity event. My brother and I would go to these monthly movie charity events, depending on the movie. The tickets were a few dollars off so why not?
I still remember the ticket stub, and I think I still have it somewhere in my collection. It was a large piece of cardboard with the movie poster printed on it including the cast members of that particular film.
I hadn't heard too much about this Planet Of The Apes so I was interested to see (according to the ticket stub) what role George Clooney would play in the movie.

Not to spoil those who haven't seen this movie, but George Clooney is nowhere to be seen. 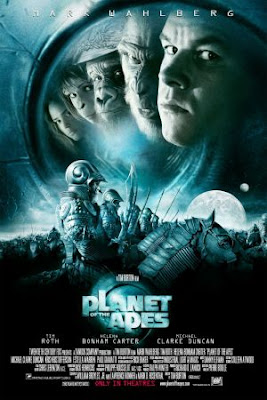 For it's time this movie was pretty darn good, and you need to commend the production staff for keeping the apes as actors in monkey suits.

Now I'll be the first to admit that Rise Of The Planet Of The Apes is the better movie but still, for actors in monkey suits-appeal, this movie is up there. 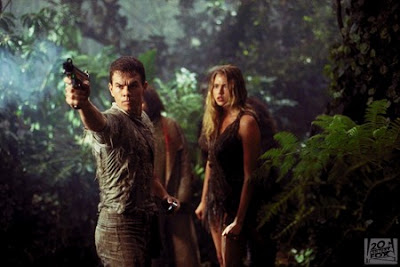 Another surprise for me was seeing Mark Wahlberg as the human (it was the role he was born to play baby!).
At the time of this movies release Mark still had a bit of the stigma from his days as Marky Mark. But since then he's become known as an actor, and he's shown he certainly can act.
In this movie? Well, there's a bit of talent. 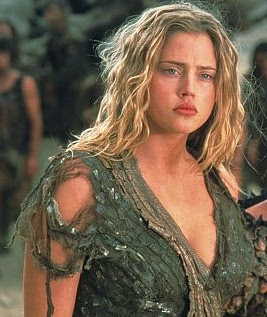 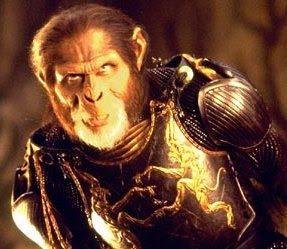 Now here's where the fun begins. Tim Roth was cast in the role of Thade.
A particularly evil monkey.
Seeing the dimensions and just the little things Tim brings to the role; it's a delight to watch. 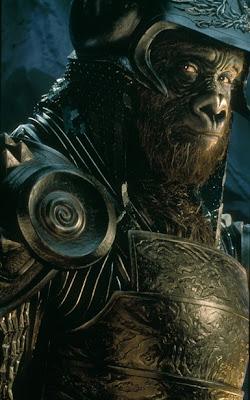 The same can be said for all the actors in monkey suits actually.
Playing the role of Attar is Michael Clarke Duncan. Michael has the physical presence but it's not until you hear his booming voice that you realise who it is.
And the damage his character visits on the other actors in the fight scenes has to be seen to be believed. Wow. 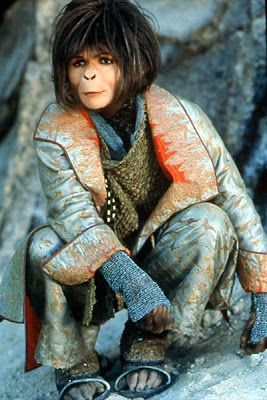 One actor I didn't like in this movie is Helena Bonham Carter, in the role of Ari.
Her husband/partner/whatever (Tim Burton) is the director so her inclusion in this movie simply felt like he was giving her a pay day.
Helena has seen gone on to milk more pay days out of about 4 other Tim Burton-directed movies.
It's like seeing your manager at work give his wife a high paying job for not really doing all that much.
It's a bit much.

It also doesn't help that Helena's role as Ari comes across as a hippie, tree-hunging, lefty extremist. Not actually something I want shoved down my throat if I'm forking over cash to see a movie. 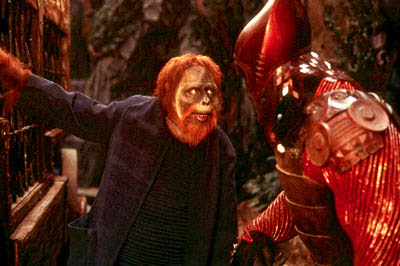 One actor really having fun in his role is Paul Giamatti. This was 3 years before Sideways came out and people started to notice Paul's work, but you can see Paul is loving the role of Limbo. A slave-trader for both humans and apes.
Limbo is also the only orangutan (that I could see) in this movie.
Not sure what that has to say about orangutans, but nonetheless it's fun to watch Paul in his scenes.

All in all I think this movie is still a very watchable, very enjoyable movie.
I give it 7 1/2 out of 10.
Even despite the noticeable lack of George Clooney. 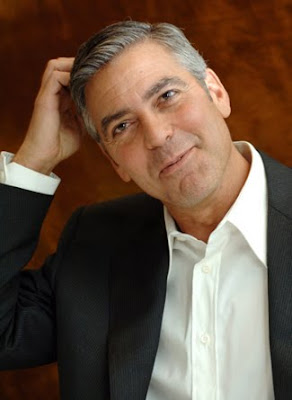 Posted by Straight To DVD at 9:27 PM No comments: