Dr. Goldfoot And The Bikini Machine

I happened to find this movie when I was reading up on Vincent Price on wikipedia (as you do).

The title intrigued me and I just had to find out more about it.

Thankfully there's not much to decipher.
Here's the movie poster (I want one for my house). 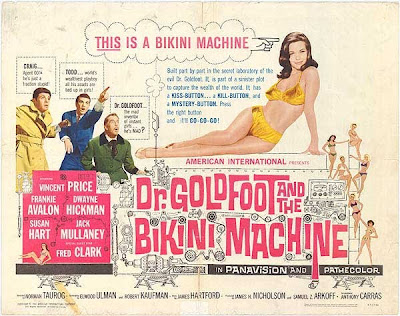 And here's the movie trailer
http://www.youtube.com/watch?v=jW42b0K6VvQ

Here we have Dr Goldfoot (Vincent Price) intent on taking over the world.
Vincent Price is perfect for this role however I soon learned that he didn't seem to thoroughly enjoy his time on the set.
Something about too much singing and dancing and not enough comedy.
Vincent, you know you're stuff. Too often comedies are spoiled by too much singing and dancing.
And anyhow, you never argue with a man in a suit like this one. 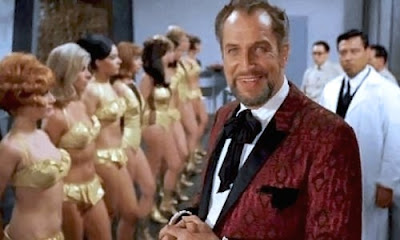 Here is the hadless secret agent Craig Gamble (played very well by Frankie Avalon).
This movie hasn't done much to take the shine off of Avalon. The movie is silly, Avalon is perfectly silly in it.
It's a perfect match! 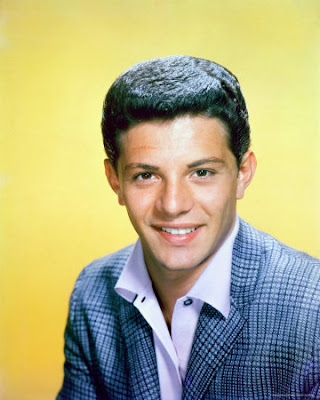 In the role of Diane is someone whom I've never heard of before, Susan Hart.
I wondered what happened to Susan Hart after this movie. She simply retired from acting.
Susan did a pretty good job as the head robot, I thought.
What's more she knew how to sex it up without showing all and sundry either.
Just look at this image of her.

Dr. Goldfoot And The Bikini Machine has obvious traits to another movie which came much later.
Yep, Austin Powers: International Man Of Mystery. The movies, despite the story differences, have so much in common it's hard to not notice.

But it's perfectly okay. Mike Myers did his impersonation of Dr. Goldfoot (at least in the costume department), yet Vincent Price did it better. 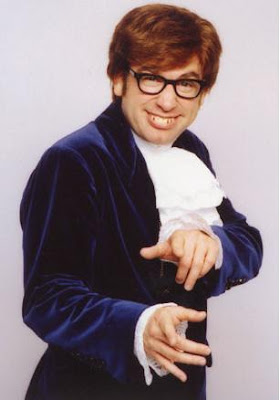 Another obvious homage to Dr. Goldfoot is Vanessa Kensington in Austin Powers, who is later revealed to be a sexbot, much like those produced in the bikini machine.
But when you look at this image of Elizabeth Hurley, who's complaining?!? 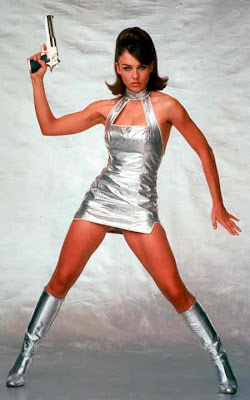 I give Dr. Goldfoot And The Bikini Machine 7 stars out of 10.
It's perfect for the era it was set in (1960's) yet by today's standard it's aged remarkable.
Therein lies the movies appeal however.
If you can track it down and you're in the mood for something fun (and very silly) I highly recommend it.
Posted by Straight To DVD at 2:28 AM 1 comment: