Now for an interview I've been wanting to get for months. In fact ever since I started doing interviews I thought it'd be a hoot to get this interview for you guys.

I hope you enjoy my interview with Daniel Emery Taylor. 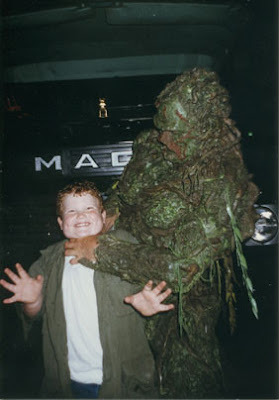 1. What can you tell us about being on the set of The Return Of Swamp Thing?

Aww, man. What do you want to know? It was so much for me to take in. It was the first acting job I ever had. I was this eight year old boy from Alabama who got to miss the last few weeks of school to go hang with mutants in the swamp. How cool was that?
It was all so laid-back. Everyone on set was great to us (me and RonReaco Lee, who played my friend Omar) and it was just so much fun. Working on this film was what made me want to continue in movies. If it had been boring I would have gone on to be a cop or fireman or something.

2 Did you ever speak to Dick Durock (Swamp Thing) during the course of filming?

Oh, yeah. Dick was great. My mother and I were both very fond of him. It was interesting, because at that young age I wasn't very impressed with Heather Locklear or Louis Jourdan. I wanted to hang with the stuntmen and the guys in the monster suits. Dick was great, because he was so patient and gracious. I had a thousand questions and he answered each one. "Are you hot?" "How long does it take to get in that?" "How do you go to the bathroom?" I was the stereotypical annoying little kid, but he took it all in stride.

The great thing about Dick that most people seem to miss is that he was such a fantastic actor. You miss so much of that because he was often in costume or in a background role but he was so good. He brought a humanity and soul to Swamp Thing that we will never see again, likely because any future adaptations will be CGI. There's a story I love to tell: I remember an interaction between Dick and director Jim Wynorski. Mr. Jim is great but not easy to reason with. Jim wanted Dick to grab a leg off of a swing set and just blast the Leech monster with it. Dick hesitated, though. He didn't think Swampy would do that. Swamp Thing, internally, was still a scientist and a thinking man. He wanted to help people. He would have pity on the poor mutant in front of him.
So, they compromised. If you watch the film you'll see that, when Swampy grabs the bar, there is a brief moment of hesitation on his face. It's like he's sorry for what he's about to do. It's great. Most people watched the movie and thought they just watched a fun film about monsters beating each other up. To Dick, though, Swamp Thing was a character with integrity and he always wanted to show that. 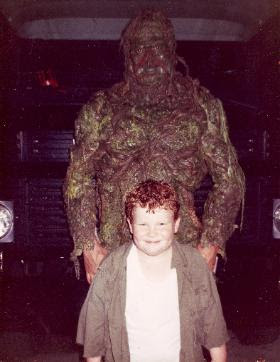 3 Can you please tell us more about your work as a Pastor?

Well, I'm afraid I never made it that far. I did attend Bible College and study to be a pastor several years ago. I quickly determined that I did not have the administrative skills needed. I also quickly grew tired of the whole Church "system." Instead of reading the Bible and preaching tangible messages that help people make it through life you are instead saddled with making sure you don't piss anyone off, or making sure it's fun enough and there is enough to do, making sure people don't leave and go to another Church. It all runs more like a country club than a house of God. And it isn't one denomination or particular Church. It seems to be all of them. It's what the Church leaders are taught.

A lot of people learn these things and assimilate. They trade passion for a comfortable income and they settle in to the life of a Pastor, never rocking the boat or making waves. Others see the whole system as a sham and wander off, having grown tired of religion in general. I did neither. Witnessing how broken the system is just made my commitment to God stronger. I recognize that we have strayed so far from His ways. We're worried more about what people wear or what music to listen to. We have forgotten the weightier issues of the Torah like love, mercy, grace, and compassion.

Plus, as a follower of Messianic Judaism, I didn't quite fit into the whole Protestant machine. (Messianic Judaism is a conservative form of Judaism that adheres to Torah but believes Jesus is indeed the promised Messiah of Israel.)

I'm not the most pious guy. I don't pretend to be. I'm not good, but my God is. The Scriptures tell a story about someone who approached Messiah and asked Him what the greatest commandment is. "Love the Lord your God with all your heart, soul, and mind ... and the second is equally as important: love your neighbor as yourself." If we did those things, everything would fall into place. I'm far from perfect but I hope it's evident that I'm trying really hard to do those two things.

4 What can you tell us about Hell House?

Hell House is a sequel to a film I did called The Legacy. I kind of explain it as the Evil Dead 2 to the original. You take the same basic premise but make it bigger, better, and use better actors. It's the story of a small town with a secret, a murderous history that it has tried to keep hidden. A family of serial killers long thought dead show up in a local haunted attraction and start killing the townsfolk. Nobody notices because they think it's all part of the show.

It was a fun flick to work on. I play Deputy Hallenbeck. The name is a homage to my character Darryl Hallenbeck from The Return Of Swamp Thing. 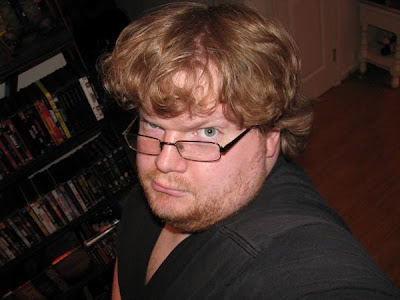 5 Do you enjoy conventions?

I love them. To me, it encompasses everything I enjoy about the film industry. I love to travel, so I'm always looking to book appearances in places I've never been. I love meeting the fans, so this gives you an opportunity to meet and hang out. And I love to buy stuff. I love the vendors. I never come home with money. Instead, I come home with a suitcase full of new Freddy and Jason stuff.
I also enjoy them because, for a lot of us, shows are like homecoming. I have a lot of friends from various parts of the country that I only see at shows. You do eight, nine, ten hours of "work" while the show is open and then you spend the rest of the night hanging out and having a drink. It's great.

6. The fans at conventions can certainly be animated. Has there been an interesting or funny occurrence at a previous convention?

The most fun stuff is stuff I can't tell you! I will tell you one funny story, though. It shouldn't get me in too much trouble. We were at a hotel in Louisville, Kentucky, and it was a pretty big show. Naturally, big shows usually translate into big room parties and the best shows will practically turn the entire hotel into a party. Well, the hotel was rocking that night. I ended up in someone's hotel room and this guy comes in wearing a dreadlocks wig. He is explaining to everyone that he is an off-duty police officer but he came to party and didn't want to ruin anyone's fun. I should probably point out that this guy is three sheets to the wind, completely hammered. About fifteen minutes later, the guy is passed clean out on the bed. Now, it is probably common sense that you should not pass out in a room full of strangers. It wasn't long before people were drawing penises on his face and taking photos sitting on his face. I wasn't really paying attention to the whole ordeal but Ari Lehman, the original Jason Voorhees, came in and was upset that people would be doing this to the poor guy. Moved by Ari's compassion for his fellow man, I helped as we rolled the guy into an office chair and wheeled him out into the hallway. What followed was an hour of trying to figure out what room the guy was in. He was awake at this point but barely intelligible. He would tell us a room ("I'm positive ... 806") and we would take him there. His key wouldn't work and he would then reveal that we were at the wrong room. ("I don't understand ... this is my room ... 806. No, wait ... 527.") Finally, around six in the morning, we rolled him into the lobby and got hotel staff to help. We dug his ID out of his pocket and told them we were just trying to help him get back to his room. So, we wheeled him to the correct room and all ended well. I hope. I never saw him after that. 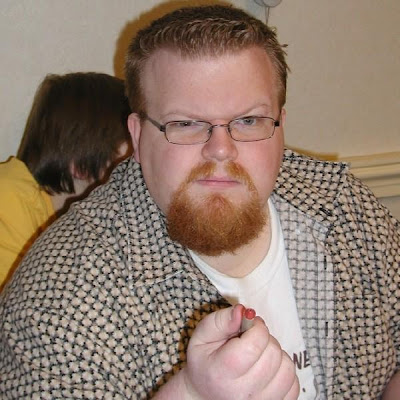 7. Is there anything else coming up?

I've always got something cooking!

I'm in the process of completing preproduction for my upcoming film Fat Chance. It's a script that I've written and I plan on directing it myself. It's about eight overweight men who are taken out into the middle of the woods to compete on a weightloss reality show. People start coming up missing. Are they running off? Is someone killing them? Who?

I wanted to do an over-the-top goofy slasher, like all of those movies I love from the 80's. I also wanted to put a new twist on some of the old cliches, like you have the guy hide in the closet but he's too big and the door won't shut. A guy tries to hide under the bed but when he does the bed is lifted three feet off of the ground.

I have a cast and crew. We're just trying to secure financing. I've recently been taking donations and smaller pledges.

Upcoming releases include Hell House and the action film Ultimate Death Match II. UMD2 features a plethora of old school wrestling legends and is about a wrestling tournament where the winner walks away with a million dollars while the loser dies. I'm also anxious about the release of Underground Entertainment: The Movie. It's a mockumentary about a television show in Florida back in the early 90's that basically predicted everything we're into now: anime, horror, video games, wrestling, et cetera. I know they were trying to get the Guinness people to recognize the film as having the most celebrity cameos of any film in history. It's a sci-fi/horror who's who. Robert Englund, Danielle Harris, Ernie Hudson, William Forsythe, Tom Savini, Scout Taylor-Compton, Debbie Rochon, on and on.

Plus, I have several projects I've agreed to. Some are official and some aren't yet signed. I can tell you to keep an eye out for Scream Queen Campfire, a Tales From The Crypt style web series featuring several genre stars. Also, I have Dark Moon on tap for later this year. It's a werewolf thriller that I'm pretty excited about.

8. How can people keep up with you?

Answer: As always, check out www.danielemerytaylor.com. From there, you can access Facebook and MySpace and all of that good stuff. 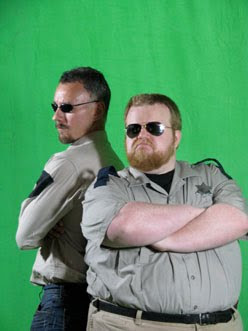 Along with Daniel's website you can also check out his IMDb site at http://www.imdb.com/name/nm0852197/

And please feel free to leave a comment.
Until next time!
Posted by Straight To DVD at 2:26 AM