Like many other people on the internet I'm a fan of The Simpsons.
When I came across Rich Koslowski's website and found that he'd done some work for The Simpsons comic book I just knew I had to interview him.

What transpired was a very interesting interview indeed.

Enjoy my interview with... Rich Koslowski

1. How did you get involved in drawing Simpsons Comics?

Sheesh! That was so long ago I'm going to have to dig deep to remember...and I only really did a few jobs for them... My self-published comic book series The 3 Geeks was at the height of its popularity back around 1999 and I parlayed that popularity by approaching Bongo. I asked if I could submit some story ideas and they were very receptive and excited as they were familiar with my work. A few weeks later I submitted several story pitches and then did a "sample" batch of drawing tests.I was approved and several story ideas were also approved. I was extremely excited as I was a huge fan of the show and saw this is a great opportunity for my career. I told EVERYONE I was going to be working on The Simpsons!... Mistake.Unfortunately I only ended up doing 3 or 4 newspaper strips for them. They were pretty difficult to work with at the time. It was a good year and a half of very poor communication on their part and, ultimately, I got upset and sent them a letter stating just that. They did end up writing me a very long apology, and half of the money I was promised on the scripts, and also promised that the communication would improve and my stories would be published "very soon." Alas, that never happened. All-in-all a very difficult and sad chapter in my professional career.
2. Which character is your favourite to draw?

If you're talking Simpsons again?...Well, I really enjoyed doing Simpsons/super-hero parodies and was quite good at them while I was, briefly, doing work for Bongo. But after the disappointment I couldn't stomach drawing any of them anymore.
3. What do you think is the appeal of The Simpsons?

The first 5-6 seasons were brilliantly written. I thought the show has gone downhill since then but in it's prime it was the best show on tv.
4. What differences are there between Simpsons work and other comic book work? 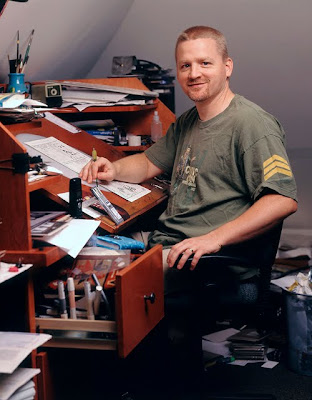 5. Have you attended any comic conventions?

Oh yes! Over the past 20 years I've done at least 100 or more conventions. It's a pivotal part of the industry and self-promotion. In the first couple years I was doing The 3 Geeks I'd hit at least 12 shows a year to promote the book. It was very exciting but very exhausting. I've scaled it down in the past few years since my daughter was born. Now I'll attend maybe 5-6 a year. I make sure to hit Comic-Con, APE, WonderCon, Minnesota Fallcon, Baltimore Comic Con as they are some of my favorites.
6. Can you please tell us about any of your self-created works?

The 3 Geeks is about rabid comic book collectors. Three very over-the-top geeks told with a very 'tongue-in-cheek" brand of humor. I "have fun" with the characters not "make fun"... this is very important to me as they're near and dear to my heart and, hey, I'm a geek too! I've been running that series since 1997! In 1999 Image Comics took over publishing it and we changed the title to Geeksville and expanded the format. It was also nominated for three Eisner Awards in 1999! I've also had three pretty successful graphic novels published; Three Fingers, The King and BB Wolf And The Three LPs. All have been well-received critically and sold very well. I also wrote an illustrated novel, The List, in 2007. A gritty Christmas tale that we're currently pitching to several studios and getting some serious interest.
7. What’s coming up next for you?

I've been focusing on developing many of my ideas for film recently but I'm about to start a new graphic novel soon. I've also got a good 3 or 4 comic book series in the works. There are several publishers interested in working with me, I just have to settle on which project I want to start first. As comics and GNs are so labor intensive, and such a major commitment, I want to be absolutely sure of which one to do first. I also continue to do freelance work for many studios including Archie Comics which has kept me busy for the past 20 years as one of their Inkers.

Well, Free Comic Book Day is coming up May 7th! I think it's a great event in comics and a wonderful tool to get new readers into comic book stores. I also always make sure to donate art and books to "The Hero Initiative" and the "Comic Book Legal Defense Fund." Both great causes. The Hero Initiative is dedicated to raising money for retired comic book creators. Many of our greatest artists and writers are facing financial difficulties and I couldn't be happier helping raise money for them. It is an honor to do so as so many of them have given me such wonderful memories. And the CBLDF raises money for shop owners and creators who find themselves facing great legal challenges that they can't afford to fight. Also a privilege to help with that cause.

To find out more about Rich's work I draw your attention to his awesome site at, www.richkoslowski.com/

I hope you enjoyed this interview. Please feel free to leave a comment below.
Posted by Straight To DVD at 3:30 AM