I'm a fan of the Bill and Ted's movies, and subsequently, the comic book.

From reading them, and lovin' them, I began a fan of Evan Dorkin's work.
To this day I get a kick out of whatever Evan is currently working so.

So when I got the chance to interview him? Yep, I was rapt.
Enjoy! 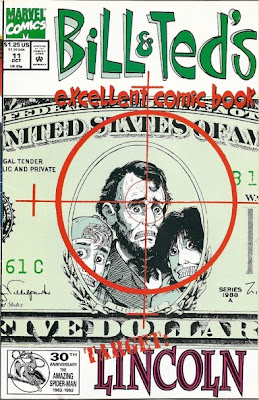 1. How did you get involved in work as a writer?

I became a writer by accident. I grew up wanting to draw comics, but I never thought of myself as a writer or thought about becoming a professional writer. But in order to make my own comics as a kid, I had to have something to draw, so I wrote my own stories, which I guess is what everyone does at that stage. When the comic book industry went through a period often referred to as the “black and white boom” in the 80's – this was after the success of the Teenage Mutant Ninja Turtles comic book led to a wave of speculation and a horde of small press publishers attempting to cash in on the black and white comic trend – a lot of rank amateurs entered the profession, they needed a lot of pages filled to produce all of those mostly-terrible comics. I was one of the people who managed to find work during that time, and after the trend died and the industry suffered major contractions post-speculation, I managed to hang on. I stumbled sideways into some small press work that I wrote as well as drew, and that led to my becoming a writer, more or less. I kept writing my own stuff, and then some folks hired me to write other stuff, and since work can often create more work, things just kept going and I ended up writing a batch of comics. Some producers who read my comics called me about doing some animation work, and that led to a few other jobs in the field. There was no plan, one thing just fell into another.

2. Please describe what it was like to write the Bill And Ted’s Excellent Comic Book.

There really wasn't any trick to it, other than keeping the characters in character, and trying to maintain the spirit of the movies in the comics. I've actually never seen the first Bill and Ted movie, I've only seen a few scenes, maybe ten or fifteen minutes all told, but I adapted the Bogus Journey sequel into comic form and between reading the screenplays and seeing the movie I got a pretty good feel for how the characters spoke and behaved. It helped that Bill and Ted are pretty much living cartoon characters, it's not like they're emotionally complex individuals. So it wasn't too difficult to write them. It was a lot of fun, though, their dialogue is colorful and has that not-too-bright surfer/slacker “dude”-speak that plays really well off smarter or more pretentious characters. Or the Grim Reaper.

The only other thing I had to keep in mind was that the comic series was ostensibly for younger readers, so I had to make sure the material never got too adult in nature or tone. Obviously my editors at Marvel and the company that owned the Bill and Ted property were looking over everything I did, and fortunately there were few instances where they objected to something I wrote. Beyond that the biggest job was to come up with some decent stories. Because Bill and Ted were so one-note I threw in a lot of new characters and ideas and used them to help spark plot ideas, along with using the characters and concepts from the two movies. Most of the stories were complete in one issue, I only did one extended storyline, a three-parter with the villain from the second movie and most of the cast from both movies. I tried to use all the characters as often as possible, I like ensemble casts and large casts of characters and this series lent itself to that approach. I also figured the fans would like to see the other characters from time to time. We knew the series was getting canceled before I started working on the twelfth and final issue, so I was able to wrap up everything and bring in every character from the series for a finale. It was a nice experience, a fun book to work on and the one and only time I ever worked on a monthly comic.

3. How hard was it to write the comic and keep it historically accurate?

I didn't write too much material based on historical fact, if I had the characters travel through time and set a scene or a story in the past I simply did a little research, like with the issue where Bill and Ted save Lincoln from being assassinated. And it ruins the future, so they have to go back and make sure he does get killed, which they don't particularly want to do, because he's there friend. But it's not like the Bill and Ted movies were documentaries or steeped in historical fact past some basic schoolbook stuff. The hardest part of the process was coming up with the stories and trying to make sure they had a solid beginning, middle and ending with some fun visuals here and there and some decent jokes. And trying to hit the deadlines, I ran late at one point and issue #8 was done by another creative team, I only drew the cover for that one. That still bugs me. I really wanted to do the entire series myself. 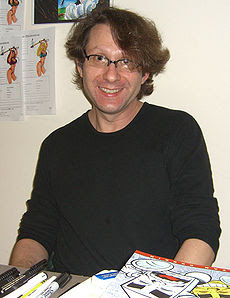 4. Is there any Bill And Ted’s story you wish you could’ve written?

I can't remember what my plans were beyond the last issue, to be honest. I do remember I was thinking about leaving the series at some point, I was running out of steam and struggling to come up with material. I was originally only going to do about four or five issues but I was enjoying the work and stuck with it, then we knew it was canceled so I wanted to finish what I started. I think I could have kept things going for a few more issues, but I was making things up pretty much as we went along, and I don't recall any long-term plans. I would have liked to have done more with Bill and Ted's wives, they weren't given much of a break in the movies, as far as having anything to do. I didn't give them a heck of a lot to do, either, I guess, but I made the attempt to give them some decent screen-time and have some things to do other than stand around saying how awesome their husbands were.

5. Please describe your work in cartoons and animation.

My wife, Sarah Dyer, and I co-wrote episodes of Space Ghost Coast to Coast, Superman and Batman Beyond, we did some re-write work for Shin-Chan, a Japanese show that was brought over to America and aired on the Adult Swim, as well as some development work for some things that never got produced. We did a pilot for the Adult Swim back in 2002 called Welcome to Eltingville, which was based on the Eltingville Club stories from my comic, Dork. It aired a few times, but the project never went any further than that. Back in the 80's I did some storyboard clean-up work for the Teenage Mutant Ninja Turtles cartoon. More recently we've worked on Yo Gabba Gabba!, a kid's series featuring live action and animated segments. We've co-written several scripts with series co-creator Christian Jacobs, and worked on the Super Martian Robot Girl segments as well as a few Story Time cartoons. That's more or less the extent of our television work.

I'm currently writing new stories for the Beasts of Burden series I collaborate on with artist Jill Thompson, which is published by Dark Horse Comics and is about a group of neighborhood dogs and cats who battle supernatural menaces in their town while the humans are blissfully unaware of what's going on. The first mini-series has just become available on Dark Horse's digital app and I'm happy to be working on a new set of stories. I'm also working on several things for Bongo for their Simpsons comics line, Sarah and I are co-writing an 8-page story for them which I'll then draw, and I've just finished up a 10-page story that she's doing the color work on. I've been doing work for Mad Magazine, various illustrations and writing something every once in a blue moon, I expect that will continue and I have a two-page art job in the issue which just came out. Next month Sarah and I are starting a small job for an animation studio, which looks like it will be fun. I've written an issue of Eric Powell's comic, The Goon, which will be out in August from Dark Horse. I'm also working on a few comics projects for the latter half of the year that I'm hoping will be announced sometime soon so I can talk about them.

7. Is there an event or charity you would like to bring to my readers’ attention?

Comics-wise there's always the Comic Book Legal Defense Fund http://cbldf.org/ which is set up to defend the comics medium and cartoonists in regards to first amendment/freedom of speech and expression issues. I realize there are a multitude of charities out there that need donations of time and money, and there are more vital issues out there, but there are few people taking care of this medium, and it's not as if helping out comics and cartoonists precludes anyone from donating to other worthy causes. I'd also like to mention Team Cul de Sac, a publishing and art auction project organized around Richard Thompson's Cul De Sac newspaper strip, the proceeds from which will benefit research into Parkinson's Disease. I'm planning on contributing a drawing to the fund-raiser,. If folks are interested in more information here's a link to Richard Thompson's blog where he writes up the project: http://richardspooralmanac.blogspot.com/2011/01/team-cul-de-sac.html
Event-wise, in June I'll be appearing at Heroes Con in Charlotte, North Carolina in the U.S if anyone cares. 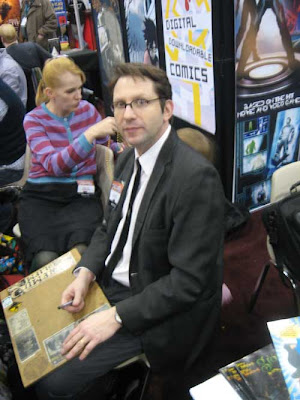 So I urge all comic book fans in the local area to head on down, and when you spot Evan say hi. And pick up an issue or two he may have on offer.

I hope you guys dug this interview. Please leave a comment below.
Until next time.