Interviewing movie stars and TV stars, singers and so forth is all well and good, but there are times I just get a real kick out of interviewing true-blue heroes.
You know, the guys who actually make a difference in the world, rather than simply entertaining the world.
So it is my great pleasure to bring you my interview with author and Space Advocate, Ed Buckbee. 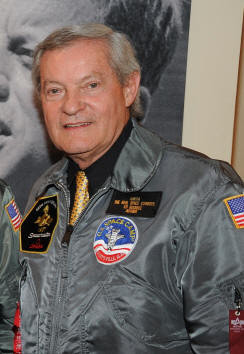 1. Why space? What excites you about space?
Space is the last frontier, where man can explore and learn to live and work. To explore space is challenging and it requires creative thinking and innovation.
The fact that we explore space for peaceful purposes excites me and we are the ONLY country to send man out of earth orbit and land man on the moon. The opportunity to continue human exploration of space beyond earth orbit, excites me.
2. How did the idea of Space Camp come about?
Wernher von Braun was the visionary who came forth with the idea of a Space Camp. I was given that challenge to design, develop and manage it. It was our plan to keep the dream of human space flight alive by sharing the excitement of space exploration with the younger generation.
3. How has the field of science changed, when looking at space, over the last few generations?

Because of our success in space exploration, science has become much more friendly. We expect breakthroughs and advancements in the fields of communication, medical, meteorology and transportation, to name a few. We are no longer satisfied with status quo. 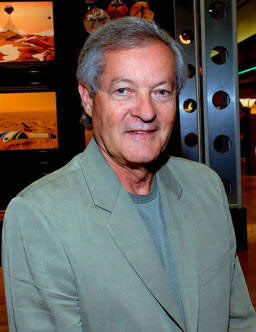 4. The world has only recently come together as a joint effort to explore space. How has this changed what you do as a space advocate?
In the old days, we were in competition, particularly with the Soviet Union. Today, we welcome twelve international partners on our International Space Station. That is a huge change in our thinking and I hope it continues. I'm one who believes we should be cooperating with China. We could began that relationship by encouraging them to use a common docking adapter that would permit any spacecraft--U. S., Russia or Chinese-- to dock together in the event of an emergency in space. As I speak about space exploration, more and more people support flying in space together. I don't think I will live to see it, but I hope one of my Space Camp alumni is a member of the international crew that lands on Mars.
5. What is the next big thing the general public can expect from space exploration?
I hope it is the landing of Curiosity, the rover on Mars. It's the size of a small SUV. Should be a spectacular mission. The Space Launch System (SLS), our new rocket and replacement for space shuttle, is now in design by the team that was trained by Wernher von Braun. This new rocket is more like the Saturn V moon rocket of my generation.
6. What is the time-frame in which you think this will happen?

They expect the new rocket to be operational by 2017. That is a difficult challenge but hopefully it will be flying and man-rated for a moon mission in the 2020 time frame.

I want to thank Ed for his envaluable time with this interview and for his thought-provoking responses.
If you'd like to read more about Ed and the work he is undertaking I suggest you check out the following site
http://www.air-space.com/EB.htm
Ed's also on Twitter, at
http://twitter.com/realspacecowboy
Please let me know what you thought of this interview by commenting below.
Until next time.
Posted by Straight To DVD at 1:15 AM