Interview with... Dexter The Robot from Perfect Match.

Okay okay, so it's not REALLY Dexter the Robot whom I'm interviewing.
Well, it sort of is.
I'm interviewing the voice of Dexter, Keith Scott.
I've previously interviewed Keith and he was a lot of fun and had a lot of interesting things to discuss.
This time.. well.
Read on and enjoy... 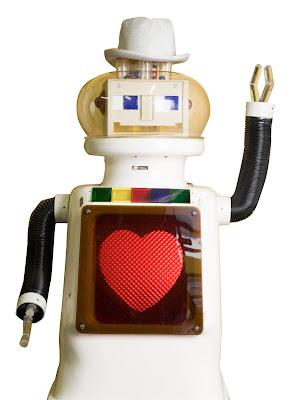 1. Dexter the Robot was loved Australia-wide on the set of Perfect Match. How come no one picked him as their perfect match?

Unfortunately no-one ever picked Dexter – not even the occasional girl who was into heavy metal in those days.
2. Who would you select as Dexter’s perfect match?

Dexter’s perfect match back then? Probably Maggie Thatcher (“iron lady” and at the time the British PM) 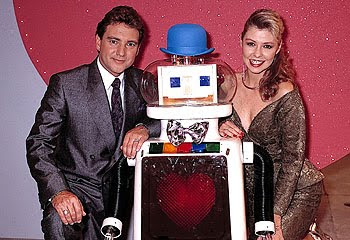 3. What was it like to work on the set of Perfect Match? Is there any behind-the-scenes stories you can tell us about?

It was a lot of fun working on the set. I was originally hired as the voice of Dexter and the show’s booth announcer. I’d worked for Grundy’s four years earlier on a short-lived comedy game-show called CELEBRITY TATTLETALES, hosted by Ugly Dave Gray. For that show I was hired as the announcer, but on the first night they very sneakily informed the studio audience that I was a stand-up comic impressionist, so I ended up doing all the audience warm-ups for that show. Well, somebody at Grundy’s was keeping notes, because on PERFECT MATCH they did the exact same thing. From the first night for three full years, I had to keep two audiences amused for a total of five hours a night. (The first audience saw the first two shows, then a second audience took their place to watch the last three – we always recorded a week’s worth of shows – five episodes - in one night).
It quickly became apparent that between doing the robot voice and the audience comedy routines, I was getting overworked, so they brought in Max Rowley to do all the show’s ”straight” announcing. I used to have a lot of fun with the audience because they deliberately left my microphone “open” for the whole night. If there were technical breakdowns...and there were, with all the contestants’ mikes and other effects....I could jump in with jokes about the contestants (the very “up-themselves” ones always suffered some sarcastic putdowns by me which really amused the big studio crowd). Or I would just throw in jokes, voice impressions, sound effects or whatever. It was a hard slog in many ways, but the experience I gained was great. Incidentally the squeaky, fast voice of Dexter was my idea: when I did the audition in November 1983, the executive producer said, “We want something modern.” I had no idea what that meant, but at the time the biggest thing in movies was THE EMPIRE STRIKES BACK – so I based it on the squeaky sounds emanating from R2D2 and just added words; at first I thought of a big deep voice like the robot in the old LOST IN SPACE show, but when I saw that Dexter was short and squat I thought of the STAR WARS connection!

4. Your voice work and the characters you’ve portrayed have made you a national icon. How do I go about nominating you as the next Australian Of The Year?
I would make a bad Australian of the Year – my natural inclination to satire and send-ups would mean I could never play by any committee rules....but I’m certainly flattered you would ask!!

Thanks again Keith. You're a stand-up bloke and a lot of fun to interview.
I'll hold off on that Australian Of The Year nomination though. :)

All the best.
Posted by Straight To DVD at 2:01 AM