Now for something a little different.
Different being that this time I'm interviewing two people at once!
I'm talking about my interview with comedy duo Ray Galton & Alan Simpson. 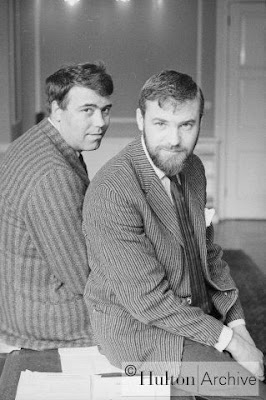 1. You’ve worked your comedy routine on radio and television. Which do you prefer?

Both mediums have their unique attractions. With radio you can go where you like and chose any location you like without worrying about the expense. The only limitations are the listeners’ imagination. One can have a cast of thousands with the mere press of a button. No sets are required therefore no set designers. Television has the additional merits of vision. Particularly important for artistes like Tony Hancock whose subtle facial reactions were so important to his comedy. And the set of Steptoe and Son required the visual to get the full benefit of its bizareness. Each medium has its own merits, for example what is the point of having Miss World on radio or come to that Ann Widdicombe in Strictly Come Dancing on television. In fact we didn’t have a preference. Our favourite Hancock varied between A Sunday Afternoon At Home on radio to The Blood Donor on television.

2. How do the two of you work together? Is there a particular method you find works best?

We only had one method. Always together. Preferably in an office. Alan did the typing. Ray sat next to him. Nothing went on to paper until it was agreed. We re-wrote as we went. If we couldn’t think of anything we might both be found lying on the floor, positions frequently adopted by us particularly after a liquid lunch with Spike Milligan.

3. Do you follow the work of other comedy teams and comedians? 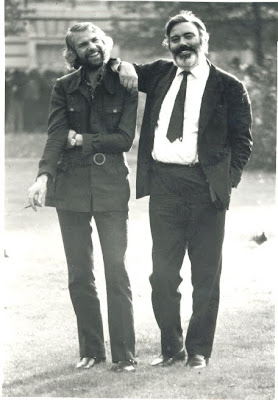 4. Further to this, which comedians do admire?


Although we shared an office with him for 14 years we only worked with him once – on a four episode 15 minute late night TV series called Milligan’s Wake. The most enduring memory of that was the fact that he didn’t alter a word. He did our script exactly as written, remarkable in itself as Spike was an inveterate ad libber.

6. What is it about Steptoe And Son that you think is loved the world over?

First of all the setting was inspired, secondly the relationship of father and son. The son approaching middle age trapped looking after his father, a situation more often seen between mother and daughter A life ebbing away, no sign of the older one dying, a tragic situation recognised all over the world - but treated as comedy. Someone once told us it was very Strindbergian. We weren’t sure what he meant but it sounded good.

7. Would you take your comedy on stage, in particular for comedy festivals?

More Steptoe and Son episodes are at this moment being adapted for the stage for performance by amateur drama groups. Some have already been done and Hancock scripts have also been done in Festivals by local reps. with great success. Three half hours make a perfect evening.

Alan has retired. Ray has written several screenplays, television series and a stage play with other co-writers and is currently working on a musical with Tony Kinsey the legendary jazz drummer.

9. Is there a charity or event you would like to bring to my readers’ attention? 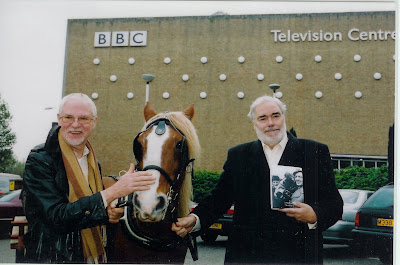 I know how busy these gentlemen are, even though Alan has retired.
I want to thank them both, and also especially Tessa La Bars who set this whole interview up.
Love ya work Tessa!

Please feel free to leave a comment below.
Until next time.
Posted by Straight To DVD at 2:39 AM