For my first movie review I want to discuss my favourite movie of all time, Ravenous.
For those of you who haven't seen this little gem, and those of you who flat-out refuse to sit through it, I believe you're doing yourself a disservice.

A word of warning though; if you are going to watch it, hold off on the cheeseburgers for the duration, okay? :) 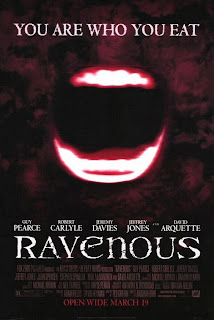 Captain Boyd doesn't have much time to settle in and meet the locals when a mysterious stranger by the name of Col. Ives (Robert Carlyle) appears, very hungry and very tired.

After recovering from his travels Col Ives commences on a story about a cave up in the mountains in which his travelling companions and himself were hold up for months, sitting out a heavy storm.

With all the oxe, horse, and shoes eaten, soon enough everyone got a taste of the fungry's.
One of the travelling crew expires from hunger, and the rest soon found him to be finger licking good.
That's when things got nasty.

I won't go too further into the story as I don't want to spoil it for you, but just check out what soon happens to Captain Boyd. Looks like he's taken a bit of a tumble.... 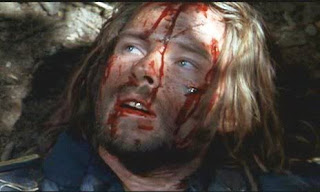 Here's Col. Ives, who appears to have found God. (haha). 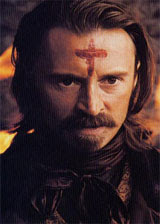 Now this scene. Oh boy, this scene is a beauty.
This leads into a chase sequence across the mountain tops.
And I've just released that I've kind of spoiled the movie for you with this one image.
But oh well, trust me, it's well worth a watch. 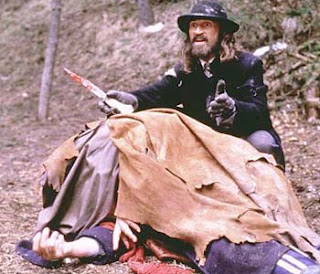 I wonder if Col. Ives borrowed the sai off of Raphael from the Teenage Mutant Ninja Turtles?
A little piece of info. During this scene the production crew ran out of blood, so Guy Pearce and Robert Carlyle proceeded to use the surroundings to knock the living crap out of one another.
Ever wanted to see a man get chocked in the face with the end of a tree stump? This is the scene for you. :) 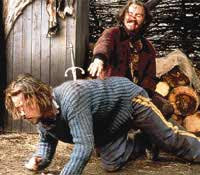 Again, this is a very creepy scene involving Col. Ives.
This movie has to be a high point in Robert Carlyle's career. He is down-right spooky, but you just can't look away. 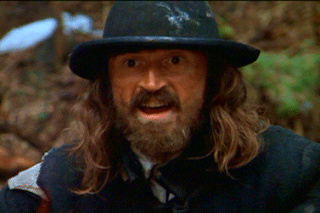 And here's an image for the ladies. Private Reich (Neal McDonough) is taking a dip in the river. Just the thing to do on a freezing cold morning.
He certainly looks tough. But then again, a good soldier ought to be. 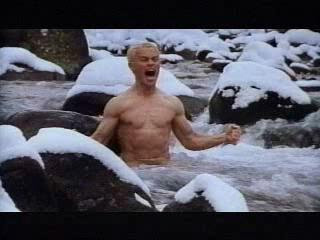 Now David Arquette also appears in this movie as Private Cleaves. He spends most of the film smoking the good stuff with a local Indian fellow, George (Joseph Runningfox). David has a few good scenes, and is mostly there for the comedic relief.
With such a brooding story and harsh overtones, David is a stand out. 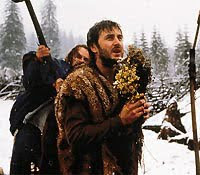 I don't have an image of him here but Jeffrey Jones plays a big part in this movie as Col. Hart. Commanding Officer in charge of Fort Spencer.
Actually there's an image above of Col. Ives standing over the body of Col. Hart. How Hart ends up on his back in this scene, well..... Whew.
Now for those of you who are wondering "who is Jeffrey Jones?" He also played the Principal in that stupid movie, Ferris Beuller's Day Off. I'm not going to apologise for disliking the Ferris Beuller movie. I find Ferris to be a smug little shit who needs a good reality check.
In fact I'd love to see a movie about how Ferris' life is now. I'm sure reality has settled in nice and hard for him and he's living a 9 til 5 job whilst trying to handle a smart-assed little shit of a son.
But I digress.
The late John Spencer (The West Wing) has two or three commanding scenes in this movie, which just goes to show how great of an actor he was.
If this all sounds good to you or if you're looking for a movie which is slightly different to your usual Hollywood fan-fare I highly recommend you track this down.
For those of you interested, here's the movie trailer;
http://www.youtube.com/watch?v=6b3q1yinmAo
If you wish to purchase the DVD you can do so here.
Ravenous

If you wish to purchase the soundtrack you can do so here.
Ravenous: Original Motion Picture Soundtrack

So, that's my first review.
How did I go? Was it too long, too wordy and detailed? Or not detailed enough?
I'm not sure what movie I'll be discussing next but I should have it all sorted and online within a week's time.
Thank you to all who make it this far through this blog. I look forward to and appreciate any comments and/or suggestions you might have.
What did you think of this review? Please comment, or email me directly at mgbouw@yahoo.com.au
Until next time
Posted by Straight To DVD at 5:04 PM