Okay, Office Space! Those who read this blog who have seen this movie please raise your hands. Okay, now those of you who also found it hilarious please keep your hands raised.
Yep, I thought so.
Simply put, for everyone who works a shitty job, or dislikes their boss will find this little comedy an absolute gem.
I remember seeing this for the first time years ago. I'd just gotten home from work and wasn't in a particularly good mood; I watched this movie and couldn't stop laughing.
It's been ten years now and I'm still laughing. 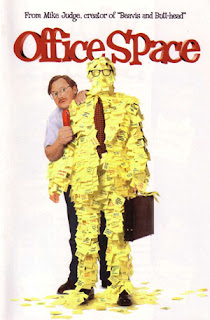 As the poster reads, it's directed by Mike Judge, who was famous at the time for making the Beavis And Butthead cartoon and movie. Mike's since gone on to create the very successful King Of The Hill animated series.

Mike is in a few scenes however the movie isn't about him.

It's about Peter Gibbons (Ron Livingston). 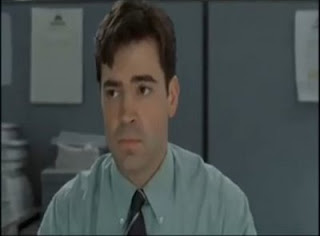 Here's Peter, looking as he usually looks at work.
Peter's job is to check lines of code for bank software.
Actually, this is the only thing which dates the movie somewhat. His job is to make sure that when the year hit 2000, none of the bank software would freeze/act up/crash.
We all now know that when 2000 hit nothing of the sort happened. So I guess the joke still works in that it shows just how meaningless Peter's job actually was. 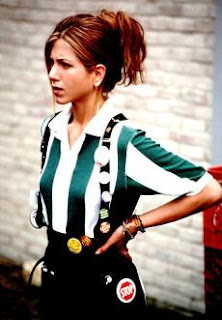 The one bright spark in Peter's day is to head down to the restuarant Chotchkie's and speak with Joanna (Jennifer Aniston).


Jennifer Aniston's inclusion in this movie was a huge selling point as Friends was very, very popular at the time of this movie's release (1999) and this was seen as one of the first stepping stones to Jennifer's movie career.
The movie didn't make great box office numbers but now has a cult status like you would not believe.
You can actually buy Peter Gibbons bobble-heads!


By the way, doesn't Joanna look great wearing all that flair? 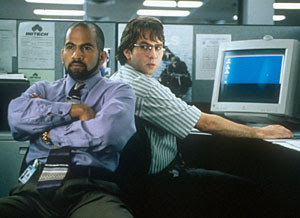 Another huge selling point for the movie are the likeable, and very funny, characters.
Here's Michael Bolton (no relation), and Samir Nagheenanajar. 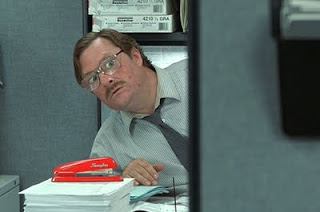 Here's Milton (Stephen Root) with his red stapler.
Stephen Root would go on to work alongside Mike Judge on King Of The Hill.
You can also buy the red stapler! 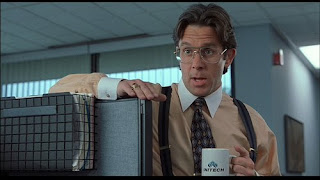 Gary Cole plays the boss at Initech, Bill Lumbergh.
Bill is your usual boss. Self-important. Egotistical. Contributes nothing whatsoever to the job at hand. Basically Bill's job is to be a downright asshole.
I bet Gary would have had a ball in this role. He'd previously starred as Mike Brady in The Brady Bunch Movie, and A Very Brady Sequel, so you know he has comedic timing.
Gary would later go on to appear again at Mike Brady in the made-for-tv movie, The Brady Bunch In The White House. I have this on DVD by the way and can review it on request; if you REALLY want. 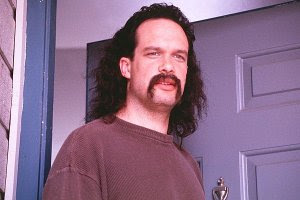 And then there's Lawrence (Diedrich Bader). My God, Lawrence. What a life. His major stress is getting his ass up at 6am to do the dry wall over at McDonalds.
If you're scratching your head trying to remember where you've seen Diedrich before, he played Oswald on The Drew Carey Show, and also Jethro Bodine in the Beverley Hillbillies movie (Does anyone have the DVD? I'd love a copy). 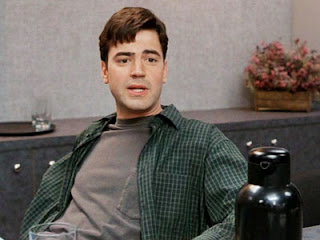 Now, the story progresses on that Peter sees a hypnotist who causes him to forget his troubles, and simply relax.
As you can see, he's at work now and Peter is quite relaxed. 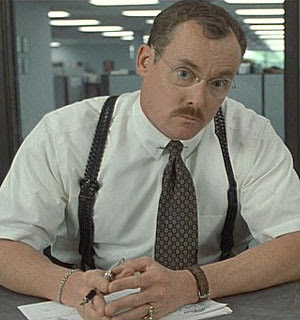 ... even whilst being interviewed by Bob Slydell.
John C McGinley plays Bob, and does so perfectly.
John would then go on to appear alongside Rob Schneider in The Animal, but that is a review for another day. 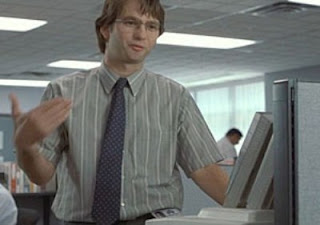 Peter remains relaxed even whilst friends and co-workers begin to snap.
Michael seems to be having trouble with the printer in one very funny scene. 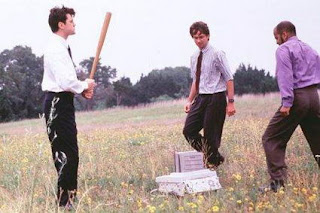 Peter offers a solution to this problem. 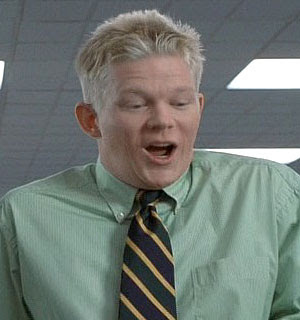 I go could into more detail about the movie plot, and the behind-the-scenes trivia, but why bother when I can simply show you this photo?
Oh!... Oh! You know what I'm saying. Oh! 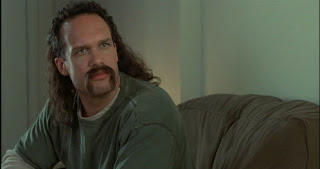 I'll end this review by showing you this other photo.
Here's Lawrence discussing with Peter just what he'd do if he had a million dollars.
Wouldn't we all, Lawrence? Wouldn't we all?
Fuckin' A, man.
Oh. I should point out that there's a bit of swearing in this movie, so if you're going to watch this with kids around you should block their ears or send them to another room.
They'd probably lose interest in watching this anyway as it's very much catered for the 20-40 year age bracket.
I hope I've given you another reason to track this down and give it a watch.
Again, it's a very funny movie; even after many viewings.
Well, I think so anyway.
Here's the movie trailer;
http://www.youtube.com/watch?v=ND7tU8JME_g&feature=related
If you want to buy the DVD, please click here
Office Space

If you have any questions or comments about this review, or if you have a movie you want me to discuss in a future blog please leave a comment.
What did you think of this review? Please comment, or email me directly at mgbouw@yahoo.com.au
Until next time,
Posted by Straight To DVD at 1:48 AM