Ah Ned Kelly. This movie held so much promise. I remember when this was released the world premiere in the Melbourne CBD was shown on the Channel 10 news, and sadly there were only about a hundred movie-goers in attendance.
If only all the comic book nerds had've known what was in store for Heath Ledger in the years to come....
But I digress.
Ned Kelly is, obviously, the story of the great Victorian outlaw and his gang, the Kelly Gang.
Glenrowan has ridden on the legend of Ned Kelly since his showdown with the Victorian Police at the Glenrowan Motel, and if you're ever up that way I highly recommend you stop by the main drag and check it out.
Now with the legend of Ned Kelly being so famous it's a wonder this movie didn't do as well as it should have.
For the life of me I don't know why.
Maybe at the time Heath Ledger wasn't all that respected in Australia.
From memory he was having some trouble with newspaper cameramen and water pistols.
Actually I think after this movie's release he pulled up stakes and moved to America with Naomi Watts.
Maybe it's lack of success was also because both Heath Ledger and director Gregor Jordan appeared on the AFL Footy Show in Melbourne to promote the film. All they got for their trouble were loud-mouth twits riding them about ridiculous topics.
I remember watching the segment and you could see the quiet look of contempt on Ledger's face.

Talking about that, here's Ledger's face on the movie poster. 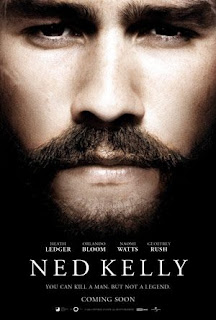 And here he is as Ned Kelly. Quintessential beard and all. 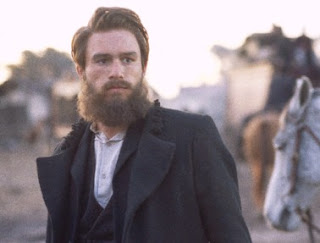 I remember seeing this movie by myself at my local cinema, but I was not alone. The cinema was packed full of people. I sat at the end of the aisle about 5 rows from the front, next to some young girls who swooned over the cast.
It has Orlando Bloom as Joe Burns, so what could I expect?
I beat all those girls wanted to be Naomi Watts, hey? 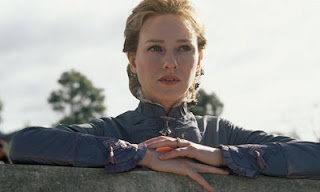 And why not? I mean, she certainly looks demure in this image. 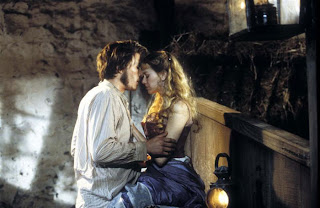 Maybe not so much in this scene.
In the stable with Heath, backed up against a lantern?
All we need is Fabio and we have ourselves a scene!

But I digress. I'm just making fun here, and to be quite honest the love story between Ned and Julia (Naomi Watts) is actually very interesting.
Whilst it may not be historically accurate this love story gives the movie that little bit something extra, rather than it simply being about the hardships of the era and the Kelly Gang versus the Victorian Police. 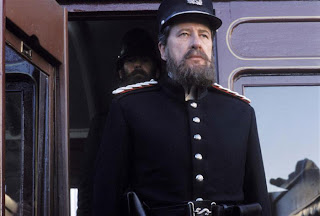 Just one look at Geoffrey Rush as Superintendant Hare and you can see the man is in need of a good chuckle.
And maybe the afternoon with Naomi Watts in the horse stable, backed up against a lantern.
I remember the first time I saw Geoffrey Rush, it was as David Helfgott in the movie Shine. I hated Rush in that film. Simply HATED him. I found him to be very irritating.
Since then however Rush has shown an acting range to be held in comparison with the likes of Jim Carrey, Robin Williams, and even Heath Ledger.
Further to this point, some years back I sat in attendance for "An Evening With Charles Bud Tingwell" who portrayed Premier Graham Berry in this film. Bud spoke very highly of Geoffrey Rush's professionalism. And of Ledger's.
Bud made mention that whilst on this film he witnessed both Rush and Ledger not break character whilst the camera was centred on another cast member, and not looking away or walking out of scene whilst another cast member read their lines.
I'm sure it is this professionalism Bud spoke of which garnered both Ledger and Rush the success they have experienced in their respective careers to date. 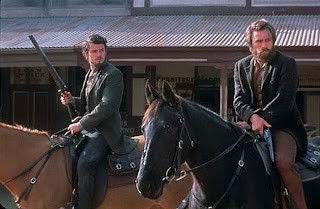 Now, for the ladies, here's a photo of Ledger and Bloom on a couple of horses.
Yee-ha! 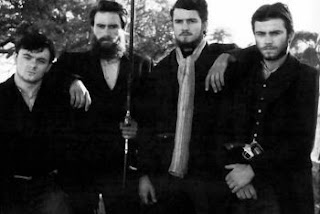 And here's the Kelly Gang. They certainly look like a nice bunch of fellows, right?
After Ned's capture at Glenrowan some 3,000 signatures were put to a pertition, asking for his pardon. So they couldn't be all bad.
As we know, this pardon did not happen.

It is not my place to spoil the movie in my reviews however I will mention this; I was surprised with how and when Gregor Jordan ended the film.
Kudos to him for doing so. 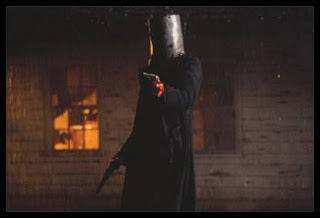 Don't you worry though, we do get to see Ledger in the Kelly armour. This is truly a heart wrenching scene. If you're interested so far with watching this film, this scene alone is a standout and testiment to the quality of Australian cinema not seen on our screens since.

Whilst I give high praise for this movie I do want to make mention of Rachel Griffiths as Susan Scott. Urgh. Act your age please honey.

For a star-rating, for those of you wanting a star rating, out of 5 I will give this movie a 3. It's bloody good, but it could've been a touch altered in some areas.
Here's the movie trailer
http://www.youtube.com/watch?v=doArSp1AIUw
To purchase the movie, please click here
Ned Kelly

To purchase the novel by Peter Carey, please click here
True History of the Kelly Gang: A Novel

For those of you interested to know, Charles Tingwell did sign my Ned Kelly DVD, and thanked me for purchasing it. He also signed my DVD copies of The Castle, and Breaker Morant, but those are reviews for another day.
What did you think of this review? Please comment, or email me directly at mgbouw@yahoo.com.au
Til then, all the best.
Maarten Bouw.
Posted by Straight To DVD at 3:34 AM