Interviewing Rob Burman was a dream-come-true for me, honestly.
For all true movie nuts, make-up artistry is really where it's at. For my money you can't go past Rob for his years of experience.

He certainly has a lot to say about the industry.
I know there's not a lot of images in this interview, but there is some really interesting thing discussed.
Enjoy! 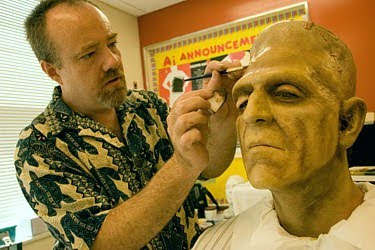 1. What does it take to be a make-up artist, working in film?

The industry has changed in so many ways from when I first started out. We used to get several calls a week to do effects no one had ever seen or done before. There were only a few dozen people doing it and the demand was getting high for that kind of spectacle. Throughout the 1980's, we were thought of on par with rock stars in some places. Everyone had long hair because those were the "Artistic" types and they were thought to be the most innovative.
After a while, the industry became more saturated with workers. The quality went down a bit and the "long hairs" were found to be more and more unreliable. They were passed over for more conservative types that looked more like businessmen. Jobs were fewer because Producers were finding it more economical to NOT do expensive effects. When they did opt for the "visual experience" then they started turning more and more to CGI. The age of the "rubber monster" was dead. Yes, they still make them, but not any where near as much as we did in the past. Now, to be in this industry, you need a business degree (To watch over your increasingly difficult finances and business dealings) as well as be a talented designer and craftsman. You need to give the Producers more than they are asking, or paying, for because there is a huge line of others just waiting to take over your position. There are several hundred FX guys just in LA alone. Thousands around the world - and we're all vying for the same production jobs. I was told once, "It isn't the guy that is best for the job that gets it, but the guy that knows how to get the job the best". You need to market the hell out of yourself and be self motivated. If you aren't, you'll wait a long time for a job. Oh, and THEN you have to do good make-up!

2. What has been your favourite movie monster creation?

My favorite thing that I have created personally is usually the thing I'm currently working on. I personally have not created any real lasting designs or characters that everyone recognizes but have worked on numerous ones that are iconic: Ghostbusters, The Thing, The Fly, Star Trek (3, 5, 6, 9 and the JJ Abrams Reboot). As far as monsters in general, there have been a lot of great ideas (Some done poorly but still effective, especially the classics). Rick Baker, Rob Bottin, Stan Winston - they've all done great stuff. Steve Johnson's shop produced some wonderful stuff that was very innovative. I take each on of them on its own merit and have both likes and dislikes about each of them (Of course, I'm an Artist!)

3. What was it like to work on the recent Star Trek movie?

My Brother Barney set out to do the best possible work he could without compromise. I think he succeeded. We had a VERY limited crew and comparatively no money. Barney only got a few hours of sleep at a time for nearly 6 months. I was the chief mold maker and one of his key consultants. I didn't get on set, but every alien you see on screen went by me to mold. I was even responsible for designing new types of ear molds (With Russ Herpich) so we could create seamless Vulcan ears. The detail required for showing a make-up in IMAX is intense and every last thing had to be perfect or it showed up on screen 20 feet tall. In the end Barney deserved the Oscar. He had some tough competition that did exemplary work so I'm glad we were even recognized by the Academy.

4. Terminator 2 has some ground breaking special effects. How did you find this over your other movie work?

Terminator 2 was actually a very short project for me. It was the first time in all the years I had known him that Stan hired me. They were having foam latex problems that they couldn't figure out so they called the expert at the time - Me! I was there for only a week figuring out the problem which turned out to be a very simple matter. In the time I was there I helped to cast the "donut head" puppet of the t-1000 (with the big hole blown through his eye) and the "splatter body" where he is standing after the grenade blows him open, just before he falls in to the molten metal.; then several of the Arnold puppet heads - there was lots going on. I ended up leaving to do an episode of the TV show "The Adventures Of Superboy" where I played one of the monsters that fights Superboy. I was surprised to get the credit since SO many projects I've done seem to not credit me (Ghost Busters, Batman Returns, etc...)

Right now, I do the occasional commercial (Denny's All-Nighter Unicorn and T-Rex) and some film and TV work but mostly I have been doing Sculpture as art and selling in Galleries and some Art Shows (The Loveland Sculpture Invitational in Colorado). Also I have several commissions in various stages of creation.
Lastly I have been spending time over the last couple of years teaching (both privately and at some schools). I have developed several different classes to cover all levels of "prosthetic make-up" from simple, out of the kit style stuff to more advanced full prosthetics. It is something I like to do and there is a good call for it right now. 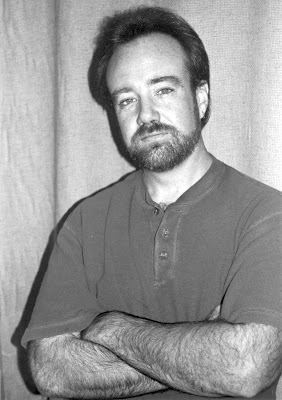 Now that would be one FUN course to take!

Thank you Rob for your time with this interview. I simply loved it.
Until next time!
Posted by Straight To DVD at 5:17 AM