I've interviewed stunt workers before, having just now posted my interview with New Zealand stunt worker Dayna Chiplin. Never have I interviewed a stunt worker/actor/wrestler though.
Until now, of course.
It also helps that Fraser Aitcheson worked on the Blade Trinity movie, as well as the Blade TV series. Which I loved.
Working on Smallville, the A-Team movie, X-Men: The Last Stand, and recently Tron: Legacy, it is with much pleasure that I bring to you my interview with Fraser Aitcheson. 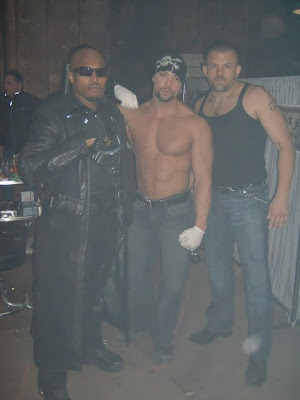 1. Please tell us about your involvement with Imaginarium Of Dr. Parnassus.

on dr. parnassus i played one of the dancing policeman. this was one of the most interesting parts i've had! during filming we displayed dance choreography and delivered our lines while wearing fishnet stockings, high heels and mini skirts. without question, i have a new respect and admiration for chorus line performers!

2. Did you have the chance to meet Heath Ledger on set?

unfortunately, i did not get the chance to meet mr. ledger, but did meet jude law briefly, who was a perfect gentleman.

3. You’ve portrayed one of my favourite bad guys (The Persuader). What was it like filming Smallville?

filming on smallville is always a fantastic time! the cast and crew are great, and easy to work with. as a comic book fan, playing the persuader was simply awesome. for some reason, i always have more fun playing the bad guy, so hopefully the writers find a way to bring that character back. 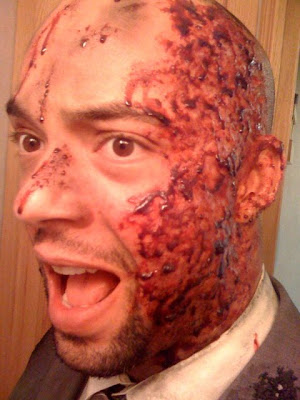 4. What stunt work did you do for Blade Trinity?

on blade trinity i was a vampire paramedic that accompanied wwe wrestler hhh. our scene involved a big fire fight with blade.

5. What differences did you find between Blade Trinity and Blade: The Series?

on blade: the series, (think i was in the pilot) i was an artist in a tattoo parlor. i got to work with ufc legend chuck liddel which was incredible. anytime i get to work with people who are the best at what they do, it's very enlightening and i try to learn as much as can from them. the difference between blade trinity, and blade: the series is that on features more time can be spent with each scene, where most of the tv series i've worked on shoot an entire episode in under 2 weeks. 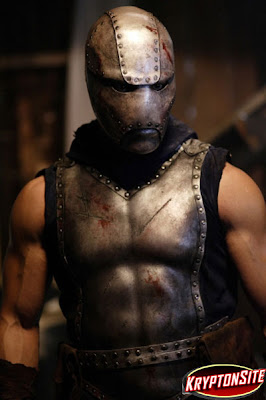 6. Stunt Safety must’ve been a huge undertaking on the Punisher War Zone film.

as for punisher war zone, i was only on for a day but acted as a stunt double of sorts for one the actors. i tested the rigging and wires first to ensure everything went smoothly when he was hooked up.

7. What can you tell us about Tron: Legacy?

because tron: legacy hasn't been released yet, i can't talk much about it. it was surreal though to work on the sequel to one of my favorite childhood movies!


Thank you for your responses Fraser. I'm very pleased.
I hope my readers' enjoyed this interview also.

What did you think of this interview?
Please comment, or email me directly at mgbouw@yahoo.com.au
Until next time!
Posted by Straight To DVD at 2:52 AM