I bet you didn't see this one coming, hey? :)
Following on from the 2000 release of Hollow Man is this straight-to-DVD venture which came out in 2006.
The original was directed by Paul Verhoeven (Basic Instinct) and stars big name actors such as Kevin Bacon (Footloose), Elizabeth Shue, and Josh Brolin (No Country For Old Men, W.).
Hollow Man 2 was directed by Claudio Fah and it's only big name star is Christian Slater. 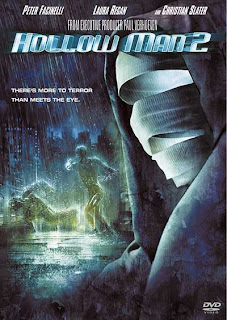 Now I might've seemed a bit harsh above. In actuality Hollow Man 2 is a fun action film.
The inclusion of Christian Slater should give you a sense that this movie is one to be enjoyed.
Christian Slater plays Michael Griffin, a rogue soldier who has agreed to a government experiment which causes him to turn invisible.
It also causes him to go on an insane, murderous rampage. 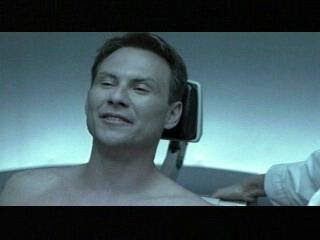 Just look at Christian Slater in this image and tell me his not clearly insane.
Or smiling at the paycheck he got for appearing in this movie.

Michael Griffin is hunting down a biologist who assisted in turning him invisible. Protecting her is Detective Frank Turner (Peter Facinelli). 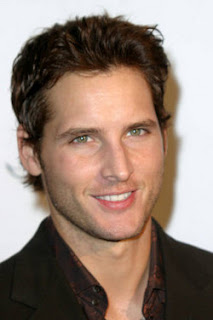 I couldn't find an image of Peter in this movie so I just sourced a promotional shot. I'm sure the ladies who read this blog won't mind. He kind of has that boy-next-door look, right?

What do I know though? 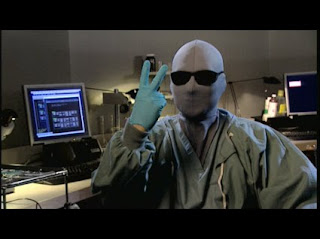 I thought I'd show you this image of Christian Slater in the invisible wrap. It seems to be a bit of an improvement over the invisible wrap used in the original movie. Well, it looks comfortable at least....
Now this movie had a smaller budget over the original however this movie came out direct to DVD so the production company saved a huge amount of the cost of releasing it theatrically.
Thankfully they have pooled this money into the special effects, which are pretty snazzy.
Certainly of a higher quality than I expected to see on a direct-to-dvd movie.
That just goes to show you that just because a movie goes straight to dvd doesn't mean it's a bad movie. A lot of the time it's straight to dvd due to a smart marketing decision made by the production crew.
But I digress.
I don't want to give too much away plot wise (because to be honest there's not a lot to give away) but if you want to see how a director shoots a scene between two invisible men going fisticuffs in the rain, this is the movie for you. 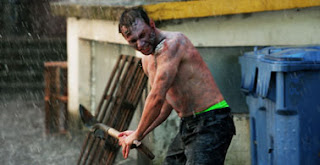 This scene above gives you an example of how it goes down....

I should point out too that this scene has a particuarly funny moment. Christian Slater is getting the crap kicked out of him by Detective Frank Turner and you can clearly hear Christian Slater say "Ouch" in all seriousness.

And if a movie can make you laugh than it must be doing something right. Right?
Here's the movie trailer;
http://www.youtube.com/watch?v=Yr1ddRkgJmw

I would recommend this movie to the Christian Slater fans out there. I'm one of them, and I'm also a fan of the original movie, hence I now own this on DVD.
I have a horror story though. I bought it when it was released and it set me back a whopping $40. Scary stuff now that I think about it.
Please click here if you wish to purchase the DVD
Hollow Man 2

So I recommend you give this film a seeing-to.
Honestly, it's a fun little action film.
6 stars out of 10.
What did you think of this review? Please comment, or email me directly at mgbouw@yahoo.com.au
Posted by Straight To DVD at 6:20 PM